Menu
Log in
Register
Install the app
You are using an out of date browser. It may not display this or other websites correctly.
You should upgrade or use an alternative browser.

This is an older report but information regarding the case: 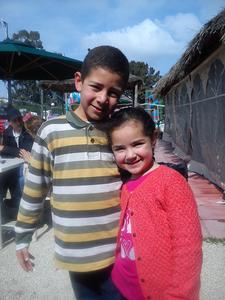 Updated April 4, 2014
As the prime minster of Tunisia visits the White House on Friday to discuss his nation's move toward democracy, Maryland officials are pressing him to resolve an international kidnapping case they say speaks directly to whether the country will honor the rule of law.

On Thursday, Maryland lawmakers called on Prime Minister Mehdi Jomaa — as well as President Barack Obama — to help two Prince George's County children caught in legal limbo in the North African country since they were taken there by their father in 2011, according to the FBI.

The case of Eslam and Zainab Chebbi underscores the long-standing problem of international child abductions, where custody orders issued in the U.S. are often ignored. More than 1,000 cases are reported to the State Department each year, and fewer than half of those children are returned.

The mother, Edeanna Johnson-Chebbi, also frames her plight as a test for the government of Tunisia, where protests sparked the Arab Spring three years ago. The country is undergoing a historic transformation, but she said it shouldn't receive recognition on the world stage as a democracy until it honors its legal system.

And the Tunisian courts, U.S. officials agree, have said Johnson-Chebbi should have her children back.

"We are literally being detained in this country by the lack of enforcement of their own laws," Johnson-Chebbi, 32, said in an interview from Tunisia, where she now has custody of her 5-year-old daughter but not her 7-year-old son.

"It's a violation of everything that they stand for."

Johnson-Chebbi's ex-husband, FaicalChebbi, is wanted by the FBI for international parental kidnapping. In 2011, a U.S. District Court issued a warrant for his arrest after he took the children from the country. Chebbi, a Tunisian national, has dual citizenship.

Maryland Sens. Barbara A. Mikulski and Ben Cardin quietly worked on the Chebbi case for years, documents show. Both stepped up pressure in the case this week as Jomaa arrived in Washington for meetings with U.S. officials.

The prime minister is set to meet with Obama at the White House Friday.

But even before that meeting, Cardin raised the case directly with Jomaa on Thursday during a private gathering on Capitol Hill with members of the Senate Foreign Relations Committee. Cardin received no commitment but said he is confident the minister will review the case.

"This is a matter of rule of law," Cardin said. "His country is making strong progress on good governance issues, on economic issues … but this is an issue he really needs to deal with because it is indicative of rule of law."

A spokesman for the Tunisian embassy in Washington did not return multiple phone calls seeking comment.

Mikulski, meanwhile, sent a letter to Obama late Thursday, asking him to raise the Chebbi case with Jomaa when the two meet. Like Cardin, Mikulski has sent multiple letters to U.S. and Tunisian authorities in past years — including hand-delivering a letter to the U.S. ambassador to Tunisia in 2012.

"I encourage you to take this opportunity to address the situation of Ms. Edeanna Chebbi," Mikulski wrote Thursday. "The Tunisian government has failed to enforce the judicial decision and has kept Edeanna separated from her son."

A White House spokesman referred questions about the case to the State Department, which declined to discuss specific topics that might be raised in meetings with Jomaa.

John Whiteley, a spokesman for the Bureau of Consular Affairs, said in a statement that the agency has been engaged in the Chebbi case and supports Johnson-Chebbi's assessment of the Tunisian court's rulings.

Preston Findlay, an attorney with the National Center for Missing & Exploited Children, said that "left-behind" parents frequently deal with massive bureaucracies as they fight to regain custody. Once a foreign court rules, those parents sometimes must restart the effort to get the order enforced.

"It's a common scenario," he said. "It's not enough just to get the court to make a ruling."

The group is aware of at least six other such cases in Maryland.

Court records in Prince George's County show the couple had an uncontested divorce in 2011 and both parties agreed Johnson-Chebbi would have custody of the children.

But in November of that year, Faical Chebbi picked them up for a weekend visitation. The three boarded a flight from Dulles International Airport, according to the FBI.

The next day, he called his ex-wife from Tunisia and told her what he had done.

Johnson-Chebbi, a U.S. citizen who was raised in Maryland, won multiple court orders requiring her husband to return the children. A Prince George's County Circuit Court judge reaffirmed her custody. An arrest warrant was issued by a U.S. District Court, and the FBI placed her husband on its most-wanted list, where he remains.

None of those orders has legal force in Tunisia.

Efforts to reach Faical Chebbi were unsuccessful. In an interview with a Washington television station in 2012, he denied doing anything wrong.

More than 90 nations, including the United States, have signed a treaty to expedite the review of cross-border abduction cases, but advocates say some countries are better at enforcing the treaty than others.

Tunisia has not signed the treaty.

The House of Representatives approved legislation in December to pressure countries that fail to resolve abduction cases by giving the White House a series of sanctions. The bipartisan bill offers the administration broad latitude on when to use those tools.

By contrast, the Senate appears to be looking for ways to prevent abductions.

For now, Johnson-Chebbi is hoping a resolution will come from the new and more democratic Tunisian government.

"We are sitting here every single day, waiting for someone to let me bring my babies home," she said. "And it's maddening."