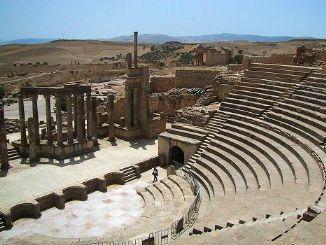 Dougga is situated in the mountains inland of Tunisia, at about 550 metres above sea level, in an area that was densely populated by the Numidians. The city served as one of the capitals of Massinissa, an Roman ally, and one of the contenders to Carthage.

The location was ideal, as it was fairly close to the heartland of the Carthaginian territory. It first served as an important military post and with the arrival of the Romans it became a regional administrative centre. Still there can hardly have been much more than 10,000 inhabitants in its heyday.

Dougga was abandoned and deserted with the Vandal invasion, and since then there has only been a small village on the other side of the hills.

The site of Dougga offers some nice ruins, where some have been restored. But as is the case for many archaeological grounds in Tunisia, the finest statues and mosaics have been transferred to the Bardo Museum in Tunis.

The whole area is about 3 km², and among the most important ruins are the Capitol with a peristyle in very good condition. The theatre, not one of the biggest, has been restored to an excellent condition.

The Libyco-Punic mausoleum to the south is perhaps the finest structure to survive from the time before the Romans.

Also there are a fine selection of temples around Dougga, some in fine condition.

The beautiful theatre at Dougga dates back to 168 CE, and was donated to the city by one of its wealthiest families. Its condition is so good that it used for the concerts at the Dougga Festival in summer.

The theatre has 19 tiers, and space for 3500 spectators. It was built up the hill, which facilitated the construction much.

Among the missing parts, was a portico on top and the wall behind the scene. The latter is not much missed, since you now are allowed a splendid view over the valley below Dougga.

The Licinian Baths are quite interesting for having much of its original walls intact, as well as a long tunnel used by the slaves working at the baths. Also, from the baths are some fine views over the valley beyond.

The baths were donated to the city by the Licinii family in the 3rd century. They were primarily used as winter baths.

Look especially out for the frigidarium which has triple arcades at both ends and large windows with great views over the valley.

The Lybico-Punic Mausoleum dates back to 3rd century BCE, and it could be worth the whole trip to Dougga in itself. It is however easy to miss if you follow the easy route through Dougga.

It was dedicated to the Numidian Prince Ateban, and in this case even the architect is known. His name was Abarish. It draws on influences from both Greece and Egypt. The roof is nothing less than a small pyramid, slanted roof had no purpose in this part of the world at this time.

It is rebuilt after a British consul removed the stone of inscription upon which it all rested. This stone is now found in the British Museum.

A similar mausoleum can be seen in Sabratha in Libya.

The market is marked by stalls on both sides, each exactly 2.8 metres by 2.7 metres. There was a fountain in the centre.

The market was constructed in the 1st century, and converted to a meat market in the 2nd century.

The Capitol of Dougga

The Capitol of Dougga must be one of the most impressive remains from the Roman era. Built in 166 CE, its 10 metre high walls stand almost like the day it was inaugurated. Take a note of the walls, the may seem crude and ordinary, but here you have the best examples of the technique known as opus africanum, where large stones strengthen walls made from smaller stones.

The portico rests on 6 impressive columns, and opens up the the interior. The Capitol served as the main temple for the entire city, and it was dedicated to the three gods of Jupiter, Juno and Minerva.

The three gods each had their niche, Jupiter had the large one in the middle. Here a 6 metre high white marble statue once stood, its remains are exhibited in the Bardo Museum in Tunis

Is the Forum next in line for reconstructions? At least upon my visit in September 2005 it looked like this. And below is almost the same photo 5 years earlier.

The Forum of a Roman city was the central place, the place where official ceremonies were performed, where people mingled. The Forum of Dougga lies beneath the Capitol and was erected towards the end of the 2nd century CE.

Originally, it had 35 columns made by red/orange Chemtou marble with white capitals. Little of that has survived to our times.

Byzantine fortifications used much of the building stones from the Forum for its structures, which explains why it largely is just a huge square.

Temple of Tellus, the goddess of crop fertility.

Roman religion was an open religion, allowing the worship of many deities, as long as these were seen in the context of the wide, common religion. In foreign territory, the need to worship local deities was respected, and Dougga is a great place to see how it was all done.

At least 11 temples have survived, of which the Capitol and the Temple of Caelestis are the greatest. Temples like the ones of  Mercury and Tellus were smaller in size and decoration, yet made from good building material. In addition there must have been a large number of smaller temples built from poorer materials, like wood or small stones, which have not survived the centuries.

End of the Portico Temple Coutyard

The temple of Caelestis was erected in the beginning of the 2nd century, not long before the time when Christianity started to gain hold in Tunisia.

You enter the temple by a wide staircase. The sanctuary has a rectangular form which originally had columns on all sides. Many of them still stands. Around the temple proper there was a semicircular courtyard with columns (see back on photo).

Walking around Dougga note the pavement with its herring-bone pattern. The quality of the work is quite impressive, and quite a high percentage of modern stonemasons would blush if they would investigate the ancient skills.

The Dar el Acheb is one of the largest houses in Dougga. Its purpose is hard to decide, either a temple or a wealthy family mansion.

Around Dougga there are the remains of some mosaics, which not yet been removed and exhibited in Bardo Musuem (Dougga).

Of statues very little remains. You actually have to go to Bardo for this too. One headless statue stands along the road leading to the Capitol.

Far more stones with inscriptions can be found. These are far less visually impressive, try to read on some of them. It is quite seldom that you stumble on scriptures this old, isn’t it?

Arch of Alexander Severus, marking the western entrance to Dougga.

Arch of Septimus Severus, lies in the southeastern corner of Dougga.

Dougga has two triumphal arches, of which the one of Alexander Severus is in best condition. Size and workmanship do not challenge what can be found at other Roman sites, like at Chemtou, Maktar or Cillium. It dates back to around 225 CE.

Almost 20 years older is the triumphal arch of Septimus Severus, an emperor of Libyan descent. The arch celebrated that Dougga had been made a minicipum. It is today unfortunately in a runious state.

The lower system of cisterns, in the southwestern corner of the town.

The Cisterns of Ain Mizeb

The cisterns of Ain Mizeb are in such a perfect condition that they have been turned into storage rooms. Hopefully just while some nearby excavations are being performed.

The cisterns of Dougga are impressive if you stop and investigate; visually they may not attract much interest.

The cisterns was a fabulous system for providing Dougga with steady water deliverances. The system on the lower photo are now called Ain Mizeb, where there were seven vaulted chambers, each 35 metre long, were constructed to have no leakage. Each chamber was separate from the others, so that problems with one would not lead to stop in water deliveries.

Water was delivered by aqueduct, and as it is in this part of the world, little or no water was carried in the summer.

The Temple of Minerva

The Temple of Minerva from the middle of the 2nd century CE has not survived well, and today only the layout with a few stones and some columns still stand.

Although it may seem to have fared to badly to be terribly interesting, the Temple of Saturn was of great importance. Only 6 columns still stand, but the platform is largely intact.

When it was built in 195, it was probably over an older sanctuary dedicated to Baal-Hammon. In Roman times, Baal-Hammon was reinterpreted to be Saturn.

The views, as you can see, are splendid. The view must have been of value to the builders of the temple as well, and it is suggested that this one of Dougga’s central religious cults.

Detail from the Odyssey with Ulysses on his ship being pulled by 4 horses.

Head of Jupiter from the Capitol

Bardo Museum in Tunis contains a nice collection of items from Dougga, which will be highly appreciated after you have visited the site itself.