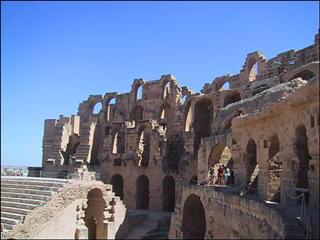 Apart from the Roman colosseum, the sights of El Jem are still covered by sand. And the city of El Jem is a sleepy place without much character. But the colosseum is great, almost as big as the one of Rome, and in better condition. It is 148 metres long by 122 metres wide, with tiers up to 35 metres. There is nothing missing which takes away its grandeur. One area of the walls is gone, and this was done in 1695 when a big hole was shot in the wall of the colosseum, in order to uncover the hiding places of dissidents against the Ottomans.

The colosseum was constructed between 230 and 238 CE by the command of the Imperial official Gordian. It’s believed to have given room for as much as 30,000 spectators, some estimates set it at 45,000. This in the town of  Thysdrus with only 30,000 inhabitants. But was a wealthy town, probably eager to impress its visitors.

The building process is even more impressive considering that the stones were quarried 30 km away at Salakta. In 238 Gordian committed suicide after an unsuccessful rebellion against Rome, where he had claimed to be emperor. With this, the construction of the amphitheatre ended. It was never completely finished, but was of course used.

Around El Jem there are more to be found, not by today’s tourists, but by the archaeologists of the future. Another, but smaller amphitheatre, can be seen around a kilometre away. And aerial photos indicate another and bigger one close to El Jem.

The arena is 65 metres long and 39 metres wide, large enough to host more than one show at a time. Note inside the amphitheatre that the decorations are rather crude. This was because the stone used was too soft for fine sculpture. The upper part of the tiers were used as a sort of VIP tribune, where roofed rooms allowed hiding from the hot sun.

Walking the colonnade of the amphitheatre is really impressive, and you will see more travellers than yourself leaning their heads backwards while walking around it all. Much of it cannot have served any practical purpose, and the construction was clearly intended to impress its visitors.

Underneath the arena run two passageways. This was the place where animals, prisoners and gladiators were kept, just until the moment when they were brought up into the bright daylight to perform what was in most cases the last show of their lives.

Looking onto the streets below

If you want the amphitheatre all to yourself, arrive before 8 o’clock in the morning, before the big tour buses start to arrive.