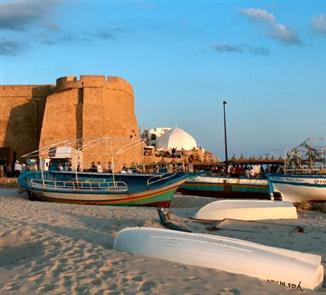 Hammamet is one of Tunisia’s main tourist hotspots with a convenient location less than an hour from Tunis airport and some gorgeous sandy beaches. This former fishing village was “discovered” by fashion designer Elsa Schiaparelli along with painter Paul Klee and French writers Georges Bernanos and Andre Gide. After World War II, adventurous travellers discovered its silky sands and in the 1960’s the first tourist hotels were built.

Despite pioneering Tunisian tourism, Hammamet has managed to remain comparatively unspoilt with low-rise architecture surrounded by lush vegetation and agriculture including fruit, vegetables and fields of grain.

Along with the beach, Hammamet has several highlights such as the Kasbah and the International Cultural Centre which occupies a villa once owned by a Romanian millionaire. American architect, Frank Lloyd Wright, described the villa as “the most beautiful house I know” and Winston Churchill loved it, so with those high credentials, visitors should certainly put it on their list of must-see’s in Hammamet.

Hammamet is clearly among North Africa’s finest beach resorts. Its fine south-facing beaches allow you to sunbathe and watch the sea at the same time.

Hammamet has about 50,000 inhabitants and 40,000 hotel beds and consequently it is so much a tourist resort that you can sometimes forget you are in Tunisia and could be anywhere in the world. All that is left to remind you are in Tunisia the enthusiastic shop keepers! German, French and Swedish are spoken all around you. Europeans walk around the streets in just shorts and sandals and whole families eat ice cream. Female tour guides in orange dresses talk non-stop while being followed by a crowd of camera-touting tourists, all pretending to be specialists on Tunisian culture and history.

Most of the year there seems to be more Europeans in Hammamet than in many European capitals and unfortunately this sometimes deters travellers, especially if they know something of the distinct charm that the city had just a few decades ago. However Hammamet is a well-adjusted port of call in Tunisia for many people and is a good place for first-time visitors to Tunisia, or for those wanting a family beach holiday somewhere pleasantly warm.

The medina dates back to around 1500, when the Hafsids erected the present walls, establishing trade and a safe place to live here. The site had earlier been an Aghlabid stronghold. Its condition is excellent considering its age, but few areas offer much of an authentic experience as souvenir stalls fill most of the streets. However there are some areas worth visiting in Hammamet, especially in the southern residential district.

Some local economic activity is still in evidence here, mainly dealing with small-boat fishing. The freshly caught fish can be enjoyed in the many local restaurants. Should you wish to go shopping, Hammamet is neither better nor worse than anywhere else in Tunisia, so check our page on shopping in Tunisia to get an idea of what bargains you can pick up.

Hammamet’s beaches stretch for many kilometres and there is virtually nowhere along the coast that is unsuitable for swimming, with the exception of the private beach strips that are fenced off by the luxury hotels. Therefore, despite many tourists coming here, Hammamet’s beaches rarely become overcrowded due to their size, and they remain very clean and
inviting. 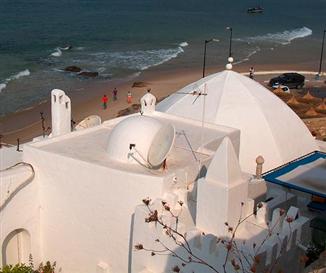 Start by admiring this little zawiyya (shrine for a holy man), now turned into a café from the Kasbah. It is a great place to spend the last hours of the day, if you can find a free table. This is as good as commercial tourism gets in Tunisia!

Shores of the Medina

Definitely a shame to miss, the walk along the walls of the medina offer many nice views of white-washed houses on the cliffs above. Late afternoon is the time to come here, when the sinking sun paints the town beautiful yellows and oranges, in contrast to the bright blue sea. 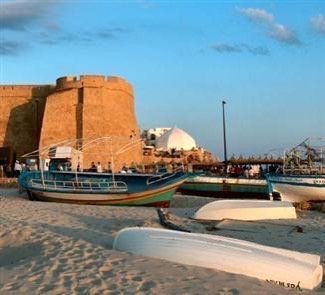 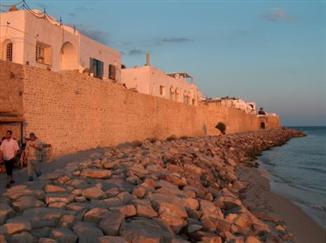 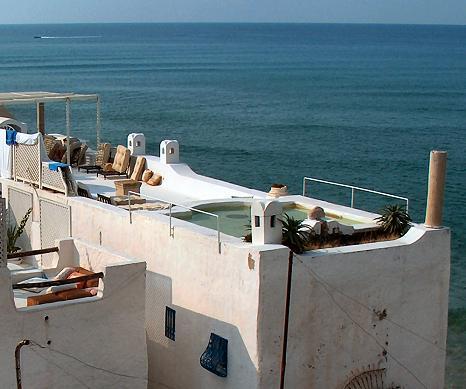 The Kasbah of Hammamet is certainly best enjoyed from the outside, where it stands guard over the ocean and the beach. Even walking around the base of the walls in the medina is enjoyable, but inside there is sadly little to interest a visitor. The Kasbah dates back to the 12th century, and has been extensively restored. Enjoy the views, take in the Gulf of Hammamet and look down on the beautiful Cafe Sidi Bou Hdid, one of the most common landmarks used in Tunisian tourism brochures. 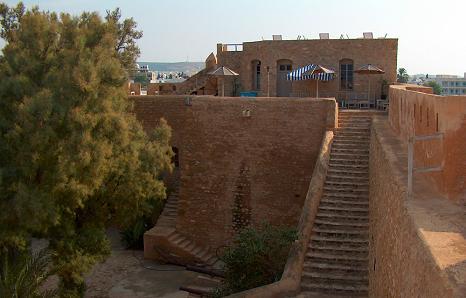 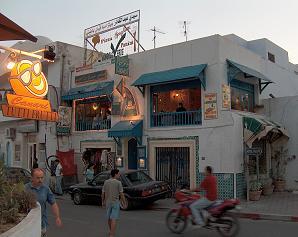 Hammamet’s modern town is centred on tourism, with pedestrian-friendly streets and boulevards lined with restaurants and shops. 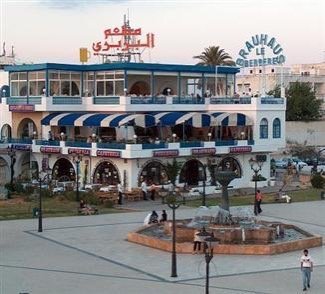 The centre is rather small, located along two avenues, which start right at the gates to the medina before they lead up the hill. There is nothing special to look out for; the architecture isn’t that memorable. 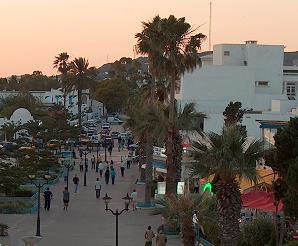 The famous architect, Frank Lloyd Wright, has allegedly said that the villa of George Sebastian from the 1920′s was the most beautiful house he knew of. Today it is a cultural centre, and open for visitors. Most noteworthy are the arcaded swimming pool and the baptistry-like sunken bath made from grey marble that could seat 4 persons.

The whitewashed villa was designed by a Sicilian architect living in Nabeul and was built by a local builder. It has some interesting Art Deco and Andalusian features. The house was the perfect place for entertaining and hosting parties, and it did! It was at one such party that Lloyd Wright came to see it. It is said that during World War II, Field Marshall Montgomery planned his military strategy as he paced beside this colonnaded swimming pool. The interior of the villa still has some interesting original furniture and the modest guest rooms can be seen. The garden is the setting of the International Festival of Music and Drama held here each summer.

As with other medinas in Tunisia, Hammamet’s medina becomes almost mystical at night. The subtle lighting reveals shapes normally hidden in the bright sunlight and in some places coloured lights are used for effect. Green is the common colour of Islam, but other colors also appear to be used (see second photo). Another advantage of viewing the medina at night is that most tourists are gone, leaving these traditional streets in a surreal shroud of silence. However, just beyond the medina walls the sounds of the lively nightlife continue.

The main reason for visiting Pupput is to get a glimpse into the ancient history of Tunisia. It is the ideal place for those staying in Hammamet who want to see a little of Tunisia’s Roman heritage without travelling to the larger sites which are located further away (also Neapolis is a short taxi drive away?). 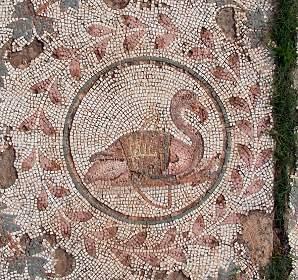 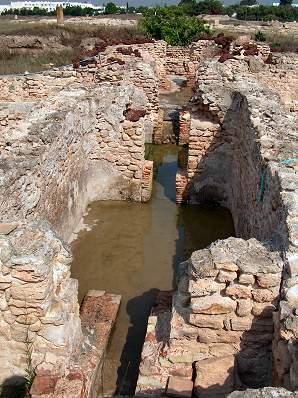 The site itself is quite modest, but has some interest. It is noted for its fine collection of mosaics, and there are a couple of Roman baths around as well as a residential quarter. The finest structure is the House of Figured Peristyle (third photo), where there are some columns still standing and almost all the floors have their mosaics intact. Many visitors find the tomb mosaics displayed on the walls quite fascinating, dating back to Byzantine times. 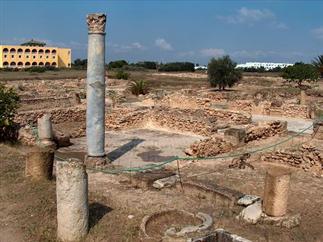 Getting There Getting to Hammamet is easy as it is only 72 km from Tunis airport. Hire a car and drive down the Trans-African Highway 1. It takes about 45 minutes to drive. Buses frequently run between the airport and Hammamet or you can make arrangements with your hotel for a shared taxi. However it may be much cheaper to go to the taxi stand at the airport and negotiate a fare. Expect to pay around 70TD-100TD (book before or at the airport as Hotels charge much more for transfers).

Where to Stay For independent travellers, the best time to get a good deal in a hotel in Hammamet is in late spring and early autumn. Through the summer months most hotels are filled up with package tourists and in winter many hotels close. It is also important to remember that Hammamet has 3 hotel areas (A) Hammamet North: Is to the north of the medina and is walking distance to the medina and most of the locations in this guide. (B) Hammamet South: This is to the south of the medina and is home to larger hotels and nightclubs this is more suitable for those who need to be near these and you can have a long walk to the medina. (C) Yasmine Hammamet (click here for separate guide): This is further south still and is a modern resort of mega hotels and a marina. You will find the best hotels here but you will need a taxi to get to the medina and vice versa for those in Hammamet north and south who wish to come to Yasmine.

Hammamet has a wide range of hotels (over 120), but the best selection is in the middle range. Rock-bottom-budget travellers will have problems finding an acceptable price at hotels here but for visitors wanting comfort at any price, Hammamet has many good alternatives. Hammamet has two camping grounds, and one is actually in the town centre but it is still a good option!

Restaurants There are more than enough places to eat in a town like Hammamet. You will have no problem finding places to eat which offer both local charm and good food. Value for money is quite good too. Saying that a good rule of thumb is that the places with no customers are not that good especially in Yasmine Hammamet where the prices can be XX% percent high.

Nightlife Hammamet has a selection of bars and discos (mostly centred around the hammamet south area) where any traveller, including females, can enjoy a night out and feel safe. Famous names include Calypso and Oasis (where world famous DJs perform) with numerous others including some British bars if you miss home already

Climate in Hammamet Hammamet has a Mediterranean climate with a hot dry season moderated by its proximity to the sea. It reaches 32C (90F) on average in July and August. In winter it rains every 2-3 days with average daytime highs of 15C (60F). Frost is rare and Tunis boasts 10 hours of sunshine per day on average

Currency There are no problems changing money in Hammamet. Banks, ATMs and many shops accept credit cards such as VISA and MasterCard. Hotels of 2 stars and above will normally be able to change money.

Gammarth is a modern well-developed coastal resort 20 km north of Tunis. It is a stunning…

The small town of Ben Gardane, or Bin Qirdan as it is also known, was founded…