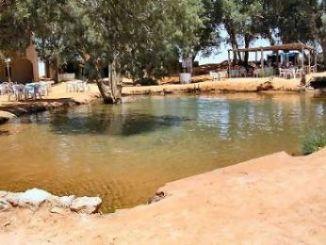 Ksar Ghilane is a strange thing in Tunisia. It is the only true oasis in the country, as measured to most Westerners image of an oasis: A green palm garden with a little lake in the middle, and surrounded by sand dunes. Still, it is so cramped by tourists at time, that the experience may appear fake to some. But the place is true enough!

Ksar Ghilane has been an Tunisian outpost, controlling the sand sea of the Grand Erg Oriental since millenniums. The Romans left a fortress here, probably it was the least popular place to serve in the Roman guards, so isolated and hot it can be here half the year.

Many of the visitors to Ksar Ghilane come the most difficult way, crossing the desert from Douz. An easier, but less spectacular, route is to follow the road past Matmata and Tamezret.