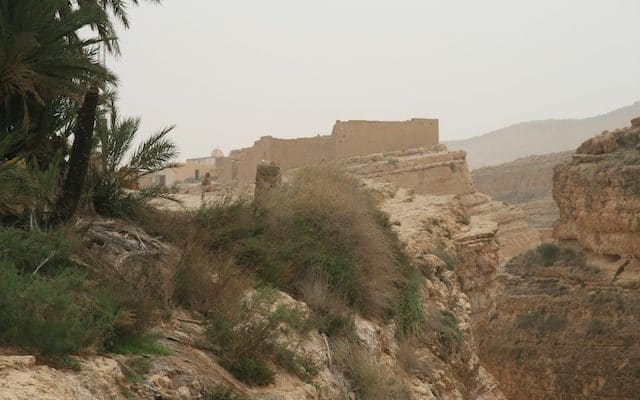 Mides is situated in the Djerid region of south west of Tunisia, right on the border with Algeria. Mides is a small mountain oasis amidst this dry and arid desert region. It can be reached by driving along route 3 from Kairouan to Metlaoui, then following minor roads from El Hamma du Jerid past the Chott El Gharsa salt lake for about 32km (21 miles). Most visitors come on organized tours in 4-wheel drive vehicles, but the road is well paved and suitable for normal cars. After passing through, or stopping at, the nearby villages of Chebika and Tamerza, Mides is reached just a few miles further on. Tourists can hire donkeys for this section of the trip, which is a fun way to enjoy the scenery between Tamerza and Mides. Although it is the last of these oasis refuges to be reached and is still relatively undiscovered, it is perhaps the most fascinating of them all. The origins of Mides go back for centuries. It was called Madés by the Romans but the settlement predates even their rule.

The local train runs from the coast at Gabes to Tozeur during the summer months, stopping at the superb Selja Gorges. Mides is about 65km northwest of  Tozeur and 95km west of Gafsa. On the road to Mides there is a large lake, even though the area is in the middle of the desert. On arrival at Mides there are several stalls, mostly selling locally woven shawls and colorful pashminas.

Mides has an impressive gorge which has been sculpted out of the rock by the river torrents of former ages. The main gorge is 3km long and was part of the natural defense of the original village. The water carved its way through these cliffs, leaving wonderful shapes and natural monuments to be enjoyed today. The amazing shapes and contrast of colors in the pink rocks makes this a stunning natural landscape. Guided tours lead visitors along the trails or explore yourself. As with Tamerza, the sudden floods in 1969 destroyed the dry mud houses of the original village and a new settlement has now been built high above the ravine. It consists of little more than a few scattered white houses amidst the barren hillside.

The best way to appreciate the canyon at Mides is to walk along it, although it may be too hot in the sheltered, humid gorge to cover the full 6km return trip. The bottom of the dry gorge is sandy and the high, irregularly shaped rock walls are many layers of stone which feels almost like marble. At one end of the gorge is a green area, obviously fed by a small water source. It supports a surprising number of different plant species and even frogs can be spotted in this tiny microcosm. At the foot of the plateau are small palm groves and gardens which make a pleasant change after so much dry rock and desert. Natural springs gush out of the rocks and create impressive waterfalls which irrigate this oasis, making habitation possible.

Overnight facilities in the Mides area are at the Tamerza Palace Hotel, a few miles south, or at the local  campground. The camping facilities are basic but staff are friendly and helpful. There are also no money-changing facilities in Mides, so bring sufficient Tunisian dinar with you. There are a few cafés serving the tourists in Mides, but no restaurant. Again, Tamerza is the best place for a restaurant meal.