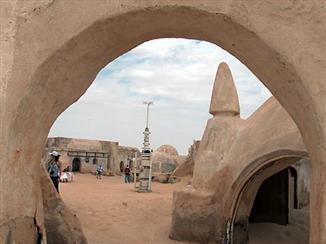 There are several places in Tunisia which have been used for the making of the Star Wars movies. The landscape and the Berber architecture has inspired George Lucas in many ways. When making scenes from Mos Espa for The Phantom Menace, he may have run out of ready-made locations, and created his own city scenes here instead.

Ten years on, the place in such good condition that it attracts a high number visitors from every day. They drive across rugged desert tracks in 4WDs, and cross a couple of sand dunes to get into the mood of desert travelling. The tracks were actually made for the shooting of another grand movie, The English Patient. The site of Mos Espa consists of 15-20 buildings, of which some are only facades. Four satellite readers or something still stands, and there is even a blue pod beneath the houses.

Mos Espa will not survive many decades, the disintegration has since long begun. Pieces are falling off, and the chicken wire and the pieces of wood holding it together are revealed. Yet, it is all impressively well-preserved. And if you’re lucky to behold it without many tourists around you, you will get the right feeling.

Your tour guide should provide you with what you need. Coffee, tea and soft drinks are sold at a handful of basic shops at Onk Jemal and at another spot of unusual rock formations half way to Mos Espa. They also sell souvenirs,most of which are transported out here from Nefta Onk Jemal is about 18 km from tozeur of which 25 km is rough piste. Onk Jemal lies about 2 km away.

Enjoy big code discounts for Links of LondonPowered by flickr embed. Nabeul is a small city…

Tataouine (pronounced Tat-oo-een) is in the far south of Tunisia and sees very few tourists. It…