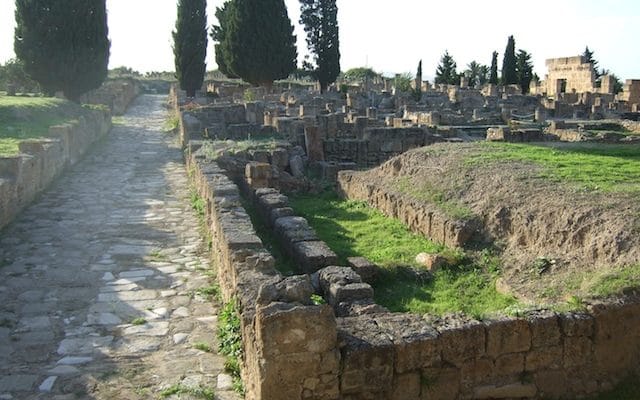 Tunisia has an unbelievable wealth of Roman remains, ancient city sites and fantastic mosaics. Utique is a compact site which can be found about 30km north of Tunis on route P8. It can easily be combined with a trip to the Lac de Bizerte which lies a little further north west on the same road. Utique can be reached by bus from Tunis, although the final 2km will have to be walked from the bus stop to the site.

The old city of Utique is believed to have been founded in 1101BC, making it even older than Carthage. It is hard to believe now, but it was a major Phoenician port. The Mejerda River, which now runs close by, deposited so much alluvium that the sea retreated with the result that Utique is now 10km inland.

On arrival, explore the Visitor Center which has some interesting informative plaques telling the history of this ancient Roman city.

The site of the ruins of Utique is set on a low hill. The walls of several villas still remain, with plenty of decorative floor mosaics.

The most important Roman villa on this site is the House of Cascades. The size of this villa, marked by a cluster of cypress trees, shows that the owner of this house was someone of importance in Roman Africa. Some of the most beautiful mosaics which remain in situ at Utique are the beautiful fishing scene mosaics in this villa. The detail of the fish, shells and eels is quite amazing after so many centuries.

Examine the doorway and you will see notches which supported the roof beams. This house has a maze of interconnecting rooms each paved with valuable marble. The pink and orange marble would have been brought from Simitthu, now called Chemtou, near the Algerian border. The green marble would have been imported from Greece. Still in the House of Cascades, the room with the U-shaped floor decoration was the dining room or triclinium and would have been lined with bench seating on three sides of the room.

To the northwest of these villas is a Punic necropolis or burial ground. Some of the finds uncovered here are in the nearby Museum, but the items of real value are now in the Bardo museum in Tunis. The stone sarcophagi are easy to identify. Apparently Punic sarcophagi were found 20 feet (6meters) below the Roman level. These were literally buried treasures and held amulets with Egyptian hallmarks on them including the symbol of the Egyptian hawk god, Horus, and the goddess Isis. Another grave dating back to 7BC had a variety of Greek treasures which included a cosmetic casket and vases showing Trojan War scenes.

Several other sites worth noting at Utique are the Maison des Chapiteaux Histories which is the House of the Figural Capitals. This villa was designed around a two-story courtyard with a series of Corinthian columns.

The Mason de la Cascade or House of the Waterfall is now labeled the House of Treasure. This is because a heap of coins was unearthed in the house. Go through the small room to the courtyard with a series of columns. The center of the courtyard had a fountain, decorated with mosaics, and a sundial. There were stables at the back of the house and a store room or granary.

When the site was excavated in the 1940s the archeologists discovered a handsome 2nd century flower-patterned mosaic. Beneath this was a first century Roman floor of black and white marble. Yet more investigation revealed a typical Punic or Phoenician floor of red cement inlaid with fragments of white marble. Many of these treasures have now been moved for safety and preservation and are now in the Bardo museum in Tunis. However, the many mosaic floors which remain at Utique are fascinating as they are in situ and can be touched and admired close up, making this a truly amazing place to explore.